Exoplanet (K2-18 b) Has Water in its Atmosphere. Could Life Exist There? 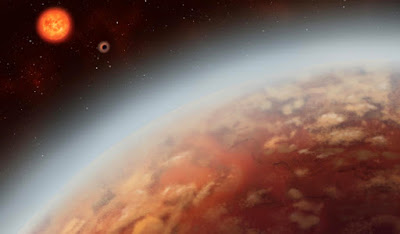 In a very recent study, a team of scientists led by professor Björn Benneke, (professor at the Institute for Research on Exoplanets at the Université de Montréal) has discovered an exoplanet (a planet that orbits a star outside our solar system) K2-18 b that has water vapour. Scientists assumes that the exoplanet K2-18 b may like be having even clouds in the atmosphere that may rain.
This strange exoplanet exists in a habitable zone of its host star which is approximately 110 light-years from the planet Earth. Although K2-18 b was discovered in the year 2015, but it wasn't until very recent past that the water vapour in its atmosphere was detected. Interestingly, K2-18 b is orbiting a red dwarf star, which is close enough to receive about the same amount of radiation from its star as the Earth does from our start (sun).

Could this means that K2-18 b has a chance to have life on it?

Possibly yes! This study has found the evidence of liquid water and hydrogen in the atmosphere of this exoplanet and it lies is a habitable zone. Scientists assume that there is quite a good possibility that this planet is much like our Earth and may have life!

Professor BennekeSuch who was leading this research has suggested that planets with atmosphere rich in hydrogen could sustain life. But the large atmosphere of K2-18 b is very thick. Thick atmosphere creates very high-pressure conditions, which according to the professor is "likely prevents life as we know it from existing on the planet's surface". He said, the type of life that may exist in this exoplanet is "certainly not some animal crawling around on this planet." Therefore, the possibility of existence of life in K2-18 b has not been ruled out.

Exoplanet K2-18 b has water in its atmosphere and may have life on it in different forms!

The team of researchers has analysed data of the planet K2-18 b derived from the Hubble Space Telescope observations, that were made between 2016 and 2017. Based on the study the scientists concluded that they have the presence of water in the planet's atmosphere.

Could this make K2-18 b an "Earth-like planet"? "We are not quite there yet," professor BennekeSuch said, but "this is really exciting."

Similar Post: Discovery of a New Planet Leaves The Solar System With Only 8 Planets