Astonishingly another undersea discovery have been made on the Easter Sunday morning in 2007, which created a buzz across world wide web on April 17th that year. I'm sure many people who have been keeping track on what's happening deep under the sea, are already aware of this fact. It's for those like Rene, who just turned on her switch of inquisitiveness, when I told her about that “Black Smoker”.

Yes... “Black Smoker” under the sea! A never-seen-before natural undersea mineral chimney - “Black Smoker” has been discovered that emits hot dark water. The discovery was made at about 8,500 feet deep under the sea by an expedition team while exploring a section of volcanic ridge along the floor of Pacific Ocean off Costa Rica.

Who could resist the temptation of knowing more about it? Same for me; I could not stop reading the article until the end and browsed for more stuff when I came across a sentence that stated, this undersea mineral chimney, releasing hot and dark water, attracts unusual marine life. Unusual marine life! That means yet a few more new info about some never-seen-before marine species.

Funded by the National Science Foundation, the discovery was named “Medusa Hydrothermal Vent Field” by the expedition leaders from the Universities of New Hampshire, South Carolina and Florida; the Duke University; and the Woods Hole Oceanographic Institution (WHOI) in Massachusetts. Why was that discovery named so, was best explained by one of the expedition leaders Emily Klein, who's a professor of geology, from Duke's Nicholas School of the Environment and Earth Sciences.

According to the researchers, they picked that name as they wanted to highlight the presence of a pink form of the jellyfish order Stauromedusae and numerous spiky tubeworm casings that festooned the vent chimney, which looked very much like “the serpent-haired Medusa of Greek mythology”.

Karen Von Damm, who's an earth sciences professor and hydrothermal vent specialist on the expedition from the University of New Hampshire's Institute for the Study of Earth, Oceans and Space, said that the bell-shaped jellyfish that they found near the vent "are really unusual, and the ones we found may be of a different species because nobody has seen types of this color before."

The researchers have explored the Medusa Hydrothermal Vent Field with 'Jason II', which is a hi-tech remotely controlled robotic vehicle operated by WHOI. Using a temperature measurement device attached to Jason's mechanical arms, researchers have meassured the temperature at the vent's mouth to be 335 degrees Celsius, i.e. 635 degrees Fahrenheit.

Klein said, "despite the great temperature of the vent water, it doesn't boil until 390 C because pressures on the ocean floor are so great, about 200 times the pressure at sea level." "Frankly, it's astonishing that a rich ecology thrives in these extreme environments," added Klein. According to her, however, that although all the organisms near trhe vents are well adapted to such a high preassures at a depth of 8,500 feet, not all of them are experiencing that extreme temperature. She explains that the temperature at the bottom of the sea is about 2 C (35 F) only and there is a vigorous drop in temperature as you move away from the vent. So the organisms living just a few inches away may experience a temperature difference by only a few degrees above normal for the ocean bottom.

Von Damm one of the members of the expedition team, said that the heat-tolerant tubeworms that had been found living on Medusa's chimneys, a type of organism called “Alvinellids” that can thrive well on the high-iron fluids. Jason another researcher also talked about a couple of other types of tubeworms known as “Tevnia” and “Riftia”, which had been found on the vent area. 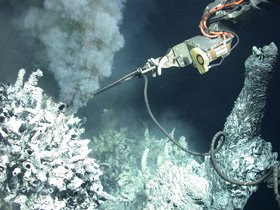 Karen Von Damm said that researchers have often come across the mid-ocean ridges wherever there are geothermal vents warmed by heat energy from the underlying volcanic channel. Karen siad, “each new vent sighting sparks fresh excitement, because each one is different. Every vent has a little different chemistry, and that helps us understand the processes going on in the ocean crust”. That means each one of them might be a shelter for different kinds of species. Karen said, “Each one gives us a different piece of the puzzle. And biologists have found more than 500 new species at vents since they were first discovered.”
Marine Discovery