on May 30, 2009
A discovery of fact of Pyramid Age!
Sonic Technology used to move the heaviest blocks of stones of Pyramids

The long hunted mystery of the heaviest stone blocks of the myriad Egyptian pyramids has been revealed! I have always wondered as to how those guys could manage to move the heaviest stone blocks that were multiple times heavier than the present day’s locomotive engines. Just a few days back while I was just cleaning my age old book shelf, I came across a news paper (The Times, London) that attracted my attention! “The clue lies hidden in the way an opera singer can shatter a wine glass”, said the researcher Andrew Collins.

According to Andrew Collins the secret laid hidden in using the sound vibrations whether made by raucous, cacophonous sound made by instruments or by making violent strikes of surfaces. Collins said that he had “compelling evidence” that the sonic technology was used to move the heaviest blocks of stones for the myriads pyramids in the ancient Egyptian civilization!

“Arguably the most accomplished engineering feet of the ancient world” as to how the ancient Egyptians built their gigantic pyramids, has long bewildered great minds. Theories that involve ramps, rollers and pulleys have been considered to the most likely explanations! Collins said that some stones that used to weigh up to around 200 tons and measuring up to 9 mts. would have required the strength the strength of over 4000 matured persons to move! Collins published his study on the 10th century civilization in his book “God of Eden” that was released in February, 1998.

Another Arab historian talked about the huge stone blocks of the myriad pyramids. His discovery also encompasses the same theme! The sonic technology was used to move the huge blocks of stones to make those mighty pyramids. According to his documents the stones were being hit with rods, and the ground by stamping of feet and clapping by thousands of people, thus creating vibrations by the sound produced. The severe sound vibration helped defying the gravitation pull of the Earth, thereby making it easy to pull the stones inch-by-inch to the desired destination. They hit upon the bright idea of rolling the huge blocks of pyramid stones on large wooden rollers. 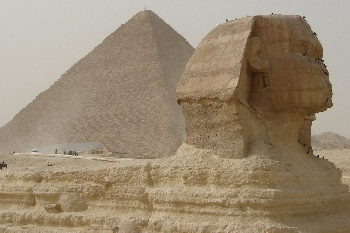 Mr. Collins said: “the ancient Egyptians were able to setup some kind of sustained sound vibrations that enabled the building blocks to defy the gravity. Although simply the leg-end, there are tradition from all round the world to speak of the movement of a stone blocks and the constructions of walls and buildings by sonic levitation.” Although some of the leading Egyptiologists declined be at agreement with the theory, many others researchers believed in the fact that Ultra Sonic technology was used to bring huge stone blocks from distant places to build the pyramids. Jacqueline Pegg, an egyptiologist, kept her study and research work focused on power of sound in her post graduate dissertation at University College, London. Jacqueline said: “I don’t think it’s impossible. If you read the Pyramid texts, it says, when King rises to the heaven, it was always accompanied with great noise, whether clapping or stamping. That could be a metaphor, but they saw sound could do this.”

My view on this is that use of sonic technology to move the mighty pieces of stones is a convincing argument. If sound can crack glass tanks (aquariums) and mirrors, if bomb sound can toss buildings, it’s not impossible that those stone blocks could be moved using cacophonous sound.
Discoveries in Egypt Discovery of Egyptian Pyramid Facts