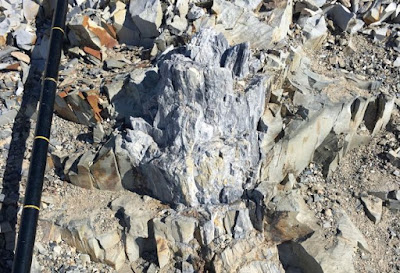 (Image credit: Erik Gulbranson)
A fossilized Glossopteris tree in the Transantarctic Mountains grew there some 280 million years ago, before being covered with volcanic ash and turned to stone. This is now an extinct species that used to dominate the landscape of South Pole once. During that time the Earth's climate was much warmer.

Earlier 2018 scientists have discovered fossil forests on the Earth's southern-most continent - Antarctica. The discovery of 280-million-year-old tree stump still attached to its roots in Antarctica suggests that the continent wasn't a desert of ice as this is known today. The land was green, as trees used to grow near the south pole when Antarctica was a part of southern hemisphere landmass called Gondwana.

The newly discovered fossils of some of those trees that grew there, indicates the existence of plants in the Anractica region. According to the researchers that there were forests that might look much like the ones that we can see warmer parts of the Earth today. Erik Gulbranson, a paleoecologist at the University of Wisconsin-Milwaukee, said, "Antarctica preserves an ecologic history of polar biomes that ranges for about 400 million years, which is basically the entirety of plant evolution."
From about 400 million to 14 million years ago Antarctica was a greener and warmer place - much different from what is it today! The trees that used to survive at that time could cope up with the extremely chilling winters with 24 hours of darkness and summers with 24 hours of daylight (much like what we find today).

Gulbranson along with his working partners have worked hard in the middle of the intensely cold bone-chilling ice desert to excavate the fossil remains of the trees.
Around 250 million years ago there were Permian-Triassic mass extinction, when almost 95 percent of Earth's species came to an end. The oceans got acidified. The Permian mass extinction was probably due to severe emissions of greenhouse gas from the volcanoes. Before this Permian extinction time, the southern polar region used to be lively green with forests existing, where trees were those of the Glossopteris genus - the largest and best-known member of the Glossopteridales. This was informed to "Live Science" by Gulbranson. According to Gulbranson, those plants were extremely large that grew from 65 to 131 feet tall. They had broad, flat leaves that were longer than a human arm.

In 2016, while hunting for the fossils, Gulbranson and his team discovered the oldest polar forest in the southern polar region. They According to the researchers, the large forest might have flourished about 280 million years ago before being buried in poisonous volcanic ash. But, quite interestingly, the forests did not die out completely; they evolved into a new form of evergreen and deciduous trees.

According to Gulbranson, the trees turned into fossil, but they were so wonderfully preserved in the rock that some of the amino-acids The plants are so well-preserved in rock that some of the amino-acid that built the protein of those trees could still be extracted. Isn't this surprisingly interesting?
Gulbranson said, by studying these chemical building blocks, the mystery how those trees could sustain the weird sunlight conditions of  the southern latitudes would be clear. He also said, we will know the factors that allowed those plants to thrive but drove Glossopteris to its extinction.
Fossil Discovery