Lernshift - A Pen That Corrects Your Spelling Mistakes... 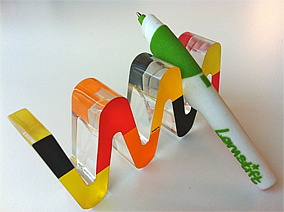 Inventors from Germany have invented a pen prevents you from making spelling mistakes. Lernstift is seemingly a normal pen with regular ink, but the first even of its kind in the world because it can vibrate when you make a spelling mistake or senses the sloppy, unreadable handwriting.