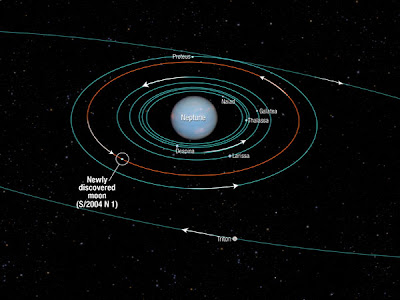 Image courtesey: NASA. On Monday, July 15, 2013 NASA announced the discovery of Neptune’s 14th moon
NASA researchers have spotted a tiny new moon - named S/2004 N1, revolving Neptune. This moon is the smallest one to orbit Neptune and is not more than about 12 miles across according to the observations by NASA. According to NASA the newly discovered star is approximately 100 million times fainter than the dimmest star that can be seen with the naked eye.

This discovery was almost an accident. Astronomers discovered the moon by spotting out a white dot that was found in more than 150 photos taken by Hubble Space telescope between the years 2004 and 2009. The presence of the moon was not officially confirmed until on July 1, 2013 Mark Showalter of the SETI Institute in Mountain View, California, found the moon in the course of his study with the faint arcs around Neptune. Mark said, "the moons and arcs orbit very quickly, so we had to devise a way to follow their motion in order to bring out the details of the system." He added, "it's the same reason a sports photographer tracks a running athlete — the athlete stays in focus, but the background blurs."

The moon takes approximately 23 hours to orbit Neptune once. According to NASA, S/2004 N1 is the 14th known moon to circle Neptune. This moon is so small small that the Voyager spacecraft could not detect it in the year 1989 when it passed close by Neptune, surveying Neptune's system of moons and rings.
Astral Science Planet Science