on January 18, 2012
Archaeologists have reported that they have discovered a tomb of an ancient Egyptian female singer, which dates back to around 3,000 years. The antiquities minister Mohammed Ibrahim Ali  said on Sunday, January 15, 2012 that the discovery was made in the Valley of the Kings in Egypt. This finding is considered as one of the rarest discoveries of its kind, and according to the antiquities minister Ibrahim Ali, this finding has been made accidentally by a team of expert archeologists from Switzerland's Basel University in Karnak, situated near Luxor in Upper Egypt. This team was led by a couple of experts, Elena Pauline-Grothe and Susanne Bickel.

According to the information inscribed on the wood plaque that was found in the singer's tomb, the woman, who used to be called "Nehmes Bastet" was a singer for the deity "Amon Ra", during Twenty-Second Dynasty (945-712 BC). Based on the researched information, Mr. Mohammed Ali stated that the singer, "Nehmes Bastet" was the daughter of high priest of "Amon Ra". Minister Mohammed Ibrahim said, "it shows that the Valley of the Kings was also used for the burial of ordinary individuals and priests of the Twenty-Second Dynasty." This fact was practically unknown, but there are good chances that archeologists may discover much more in the Valley of the Kings. This discovery is hence very significant. Till date the tombs that have been discovered in the valley were of those , who had been somehow linked to the royal families of ancient Egypt. 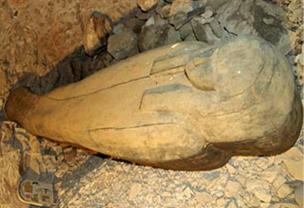 The tomb of a female singer dating back almost 3,000 years (AFP: SCA)
Discoveries in Egypt