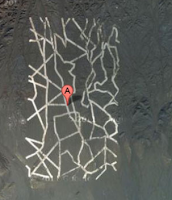 The credit of this image goes to Google Map. A network of a strange tangles of while mysterious lines have been discovered in China's Desert. New satellite photos have appeared in the Google map, showing unidentified linear structures in the middle of the China’s desert. What are these lines? The news has created a sensational buzz across the web. Big brains are wondering who would have made them and why have these tangles of white lines been made! Are they some gigantic structures that China has been building in the middle of the desert? The location is in Dunhuang, Jiuquan, Gansu, north of the Shule River that crosses the Tibetan Plateau to the west into the Kumtag Desert. The total coverage area of white lines stretches approximately one mile long and over 3,000 feet in width.

Seemingly made of huge metallic stripes, this could be the dust that has been dug by machinery. The tracks are neatly executed, and they seem to be designed to be seen from the orbit. While examining this mysterious lines ni the desert of China a few things have been cleared off. Firstly, the image doesn’t represent any “structure”. The photographed lines are flat as if they are roadways entangled with each other. The lines may appear as if they are formed by sand blown over them in places, which suggests that they have indeed smooth surface, most likely that they are low to the ground.

Similar lines had been discovered called “Nazca Lines”, in the Atacama desert of Peru. The fact that the lines are visible only from a great height, doesn’t mean that they were created to be seen from the orbit.
Mysterious Discoveries in Desert Weird Discoveries