, which is almost of the size of New Jersey has been discovered. What's most interesting about it is that this asteroid has a very unusual shaped 0- the shape of a dog bone. It orbits the Sun between the planets Mars and Jupiter. 216 Kleopatra - the dog bone shaped asteroid had been mapped with Earth-based radar, reflects back the radio waves so well that astronomers could assume that it is composed mostly of metals such as nickel and iron. The unusual dog bone shape and the unique composition of 216 Kleopatra could have been resulted from the central regions of a tremendous collision between larger asteroids billions of years ago. Kleopatra - the dog bone shaped asteroid, according to the astronomers is not completely solid. The surface is made of loosely consolidated rubble, although its core may contain large solid-metal lodes. 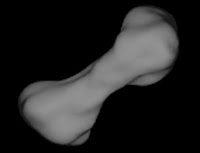 Good news is that the Astronomers said that 216 Kleopatra will never collide with the Earth, rather it may serve as one of the most important sources of raw building materials - may be sometimes in the future.