How Hot is Mercury?

on March 25, 2011
Back in December 2008, I had made a post about how cold is Pluto here on this blog! I get hits to this post still today, which made me wonder how intensely people are interested to know about the other planets. Well... I am of no exception! My post on how cold is pluto has been a big hit on this blog. Seeing this I started to make a bit of research work across the web and a few other sources like magazines, books and encyclopedias etc. to know more about Mercury. Here's now how hot is murcury :) Read on... 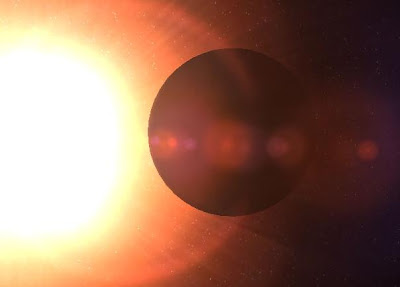 Being a planet closest to the sun, Murcury is known to be the hotest of all planets in the solar system... known fact! But how hot is it? Incredibly hot? Blisteringly hot? Blazingly hot? Or is it even more than what you can think of? Adjectives do not always work well while explaining certain things!

Mercury is lack in significant atmosphere, which acts as the blanket on a planet. Since in case of Mercury the atmosphere is abent, it receives the full heat generated by the sun. I used to think that the planet Mercury is hot in totality, which after coming across certain documentations of researchers, has proved to be a wrong notion.

Researchers say, only the side of the planet Mercury that faces the Sun is hot. The opposite side, facing off the Sun, is almost as cold as space itself.

Like our planet - Earth, Mercury rotates. The face of Mercury facing the sun is always changing and it takes over 58 days to complete a single day. So the temperature changes according to planet's portion facing the sun. Researchers have discovered that every single part on Mercury receives 6.5 times as much sunlight as the same spot on the Earth.

At the hottest point of Mercury, temperature may rise as high as 700 Kelvin (430 °C) for the regions directly facing the Sun, while its opposite side can get down to 110 Kelvin (-163 °C). The absolute coldest regions of Mercury are the darker regions of the planet’s polar craters. These are parts of this planet that that never face sun, and the planet's surface temperature gets as low as 90 Kelvin (-183 °C).

Quite interestingly, the planetary scientists are hoping to find evidence of water ice in these shadowed craters of the planet. They hope that if water at all exist on mercury it might have been existed on Mercury for millions of years, because these parts are protected from the blazing Sun.
Facts About Mercury Planet Science