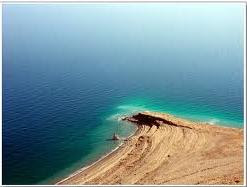 With about 9 times more saline than any other oceans on this planet, Dead sea has been aptly name, as no life has been able to survive there, except of a few - too few hardy bacteria. Dead Sea has been considered to be one of the most extreme habitat on this planet. While on a project to discover life under Dead Sea, a researcher Dr. Joseph Lati said,"No one can answer for sure what the response of nature to the mixing will be." He added, "We have to go very carefully with this project until we know more about the biological and chemical effects. There might be micro-impacts that we don't know about until they hit us."

Howbeit, this was just a bit about the mystic Dead Sea. This post is all about probably one of the most interesting discoveries ever! Yes... The lowest point of our Earth. The shore of the Dead Sea has been scientifically determined to be around 1,400 feet (nearly 420 meters) below sea level, which marks it as the planet's lowest point on land.

Documentations have been brought forth with the evidence that the lowest point of the Earth on land is the Dead Sea that borders Israel, the West Bank and Jordan. The Dead Sea is sitting above the Dead Sea Rift, which is a tectonic fault line between the Arabian and the African plates. The occasional movement of these plates causes the Dead Sea dip down nearly 1 meter down each year. Historians have researched out that the Dead Sea used to be linked to the Mediterranean Sea in the past. Over a geologic time scale, the Dead Sea got de-linked from the Mediterranean Sea, gradually got evaporated, which concentrated the salt in the water. The Result is... today Dead Sea is 30 to 31 percent mineral salts.