on March 09, 2011
In the year 2010, a group of researchers has got the first rare glimpse of of a marine life in the North Atlantic. They have used a high-tech robotic camera to discover this marine life that, they claim, could give a more in depth clue about the ecosystem of the under-sea world and the climate thereby some 1,000 years back. The submersible robot camera had been operated by the crew aboard the Canadian Coast Guard ship Hudson. This hi-tech underwater, robotic camera enabled the crew to reach around 500 meters deeper than they had reached ever before.

The submersible robotic camera sent deep under the see by the scientists returned back amazing images of tulip-shaped sponges, brightly colored corals, delicate pink stars and feathery organisms. This never-seen-before amazing organism were found scoured the bed of the ocean at a depth of around 9,800 feet [3,000 meters] off the Atlantic coast of Newfoundland. 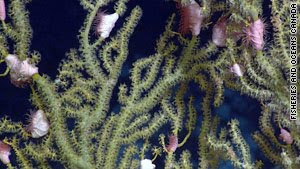 A group of researchers from three Canadian universities and the Spanish Institute of Oceanography had worked on this for 20 days to study 11 zones under the protection of the North Atlantic Fisheries Organization. Exploring these zones was very important as there were "trees of the ocean," said Ellen Kenchington (one of the lead scientists in the expedition), research scientist with the Fisheries Department of Canada. Kenchington told CNN affiliate CTV from her office at the institute as pictures from the robot streamed on her computer, "It's been really spectacular. It's really changing our perception of the diversity that's out there. ... We're seeing new species in deeper waters." She also told the Montreal Gazette that the scientists could look at the coral's chemical composition, which helped them determining the temperature of the water and other relevant data from 1,000 years ago. she said, "That's how we are able to say if there is warming or a change in climate direction. In order to understand the present, we need to put it into context."

The finds were really interesting! The corals have been a highly successful life form for 250 million years. They are very tiny animals and polyps, which are genetically identical individuals. Interestingly, they can eat - kill plankton for food and also defend themselves. In the living process they use to secrete calcium carbonate, which becomes the basis for an external skeleton on which they sit. These hard calcified skeletal bodies can grow enormously big over long span of time to form coral reefs. T, which are amongst the very important part of the ecosystems and can provide shelter to over 4,000 species marine lives, including fishes.

According to the lead researcher Ellen Kenchington, the research would be helpful to "evaluate areas that are still too deep for current fishing technologies but could be accessible in years to come. This will enable us to give advice in the future about what types of organisms are in these areas before they're fished."
Marine Discovery