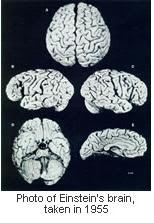 Did you know that the brain of scientist Albert Einstein had been pickled in a Jar for 43 Years and driven across the nation in a Trunk of a Buick?

After the death of Albert Einstein in the year 1955, his brain was removed without seeking any permission from his family. His brain was removed by Thomas Stoltz Harvey, who was a pathologist at the Princeton Hospital. It was this man - Thomas Stoltz Harvey, who conducted the autopsy. Harvey took the Einstein's brain home and stored it in a jar. He was later fired out of his job for refusing to relinquish Einstein's brain.

Years later, Thomas Stoltz Harvey was permitted by Hans Albert to carry out a detailed study on Einstein’s brain. Harvey sent out slices of the brain of to researchers and scientists across the globe. One of these scientists was Marian Diamond of UC Berkeley. Diamond, on a study with Einstein's brain discovered that Einstein had much more amount of glial cells in the region of the brain compared to a normal person. The Glial cell are responsible for synthesizing information.

In another study on Einstein's brain conducted by Sandra Witelson of McMaster University, she discovered that his brain lacked a particular "wrinkle" called the Sylvian fissure. Witelson speculated that this unusual anatomy allowed neurons in Einstein’s brain to communicate better with each other. Other studies had suggested that Einstein’s brain was much denser, and that the inferior parietal lobe, which is often associated with mathematical ability, was larger than brains of a general person.

The saga of Einstein's brain can be quite strange at times: in the early 1990s, Harvey went with freelance writer Michael Paterniti on a cross-country trip to California to meet Einstein’s grand daughter. They drove off from New Jersey in Harvey’s Buick Skylark with Einstein’s brain in a jar in the trunk! Paterniti later wrote his experience in the book "Driving Mr. Albert: A Trip Across America with Einstein’s Brain"

In 1998, the 85-year-old Harvey delivered Einstein’s brain to Dr. Elliot Krauss, the staff pathologist at Princeton University. Harvey said, that after safeguarding the Einstein's brain for decades "like a holy relic" he handed it over to the pathology department at the nearby University Medical Center at Princeton. It was this the university and town where this enigmatic genius, Mr. Albert Einstein had spent his last twenty years.

At the age of 85 years Harvey said slowly, "eventually, you get tired of the responsibility of having it. … I did about a year ago. I turned the whole thing over last year [in 1998]."

Guys... more to come here about Einstein. Keep dropping by my blog to find what's new up next!... Till then great time ahead!
Great Minds Special Facts

Mohammad Shafiq Khan said…
This is straight & simple that Einstein has been mathematically, theoretically, experimentally proved to be great trickster in a published scientific research article titled 'Experimental & Theoretical Evidences of Fallacy of Space-time Concept and Actual State of Existence of the Physical Universe (www.indjst.org; March2012) available on the linkhttp://www.indjst.org/archive/mar-2012/1-mar%20khan.html.
These being findings of scientific research article published in peer-reviewed journal so no Tom, Dick & Harry can reject or question the findings in the published article for which the well known & accepted scientific proceadure is publication of the valid rebuttal article in peer-reviewed journals. Till that time Einstein's brian is not to be considered as the brian of genius ever but that of the greatest trickster.
December 1, 2012 at 5:20 AM