on January 25, 2011
Linhenykus Dinosaur Probably used its long digit to dig termite mounds... guessed the researchers
Here's again a great news for discovery. This post is about the discovery of a dinosaur - a parrot-sized single fingered dinosaur that has been been announced by the scientists just yesterday - Jan 24, 2011. The scientists have discovered a parrot-size dinosaur with just one enlarged "digging" finger on each hand. Fossil remains of this strange dinosaur have been unearthed in Northeastern China, Linhenykus monodactylus that is a member of the theropod dinosaurs, which is a group of two-legged carnivores that includes Tyrannosaurus rex and Velociraptor. 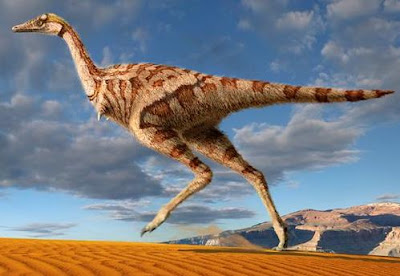 Although most theropods had three fingers on each hand, but Linhenykus monodactylus happened to fall under a family that is known as "alvarezsauroids" - small, long-legged dinosaurs with one big finger alongside two almost non-functional nub fingers. The study leader Xu Xing of the Institute of Vertebrate Paleontology and Paleoanthropology in Beijing said, "some researchers speculate that these dinosaurs used their hands to dig termite nests." He said, "this was probably the case for Linhenykus as well"

According to Xu Xing, the hand of Linhenykus had a leftover bone for a second finger, but the nub of a digit would not have been functional, which makes Linhenykus the only known one-fingered dinosaur. According to the researchers the other dinosaurs in the same group probably didn't make much use of their functional nub fingers. According to them "the extra fingers would have been biologically inexpensive to maintain, so they didn't totally disappear." On the other hand, "the Linhenykus had no working vestigial nubs, and its one long finger wasn't as specialized for digging as the digits of other alvarezsauroids. This demonstrates that hand evolution in this group "did not follow a simple linear trend," the study authors write.