on November 28, 2010
Here is another news on discovery that has amazed the lovers of animals world wide! The story is of the researchers exploring deep into the the jungles of Colombia. A British-led team of well versed scientists who walked into the deep Columbian forest in search for frogs that are believed to be extinct since World War I, has ended up with discovery of a frog species that was never known to science so far. 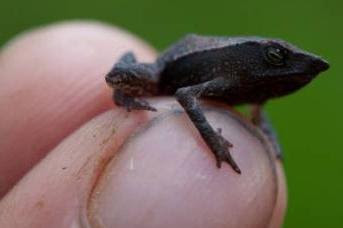 Three species hitherto including the one very strange "tiny beaked frog" that have always been unknown to mankind have been discovered in Colombia. Amongst the others were another type of toad and the a poison-secreting rocket frog, which is very attractive.

The "tiny beaked frog" which is even tinier than a human thumbnail at the maturity has deep purple skin with small blue blotches on it. The most fascinating fact about this frog is that it has a beak like extension in front of its nose, which led the scientists give it such a name. 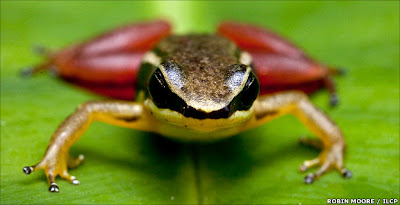 The next discovered treasure is a red-legged tree frog. This is another beautiful amphibian with distinctive black streaks from the nose region to the body. Interestingly this is a poisonous frog and carries toxic chemical cargo, though this new species is less toxic than most other toxic frogs known to science.

The third discovery is the brown toad with exceptionally beautiful red eyes is another important addition to the zoological record. "I have never seen a toad with such vibrant red eyes," said Robin Moore, Conservation International, the scientist who led the team.

He also said, "this trait is highly unusual for amphibians, and its discovery offers us a terrific opportunity to learn more about how and why it adapted this way." George Meyer, a long-time Simpsons writer and amphibian enthusiast, said, "the toad's imperious profile and squinty eyes indeed look like Monty Burns."

As the leader of the expedition, the Scottish amphibian conservation officer and photographer, Robin Moore, 35, from Edinburgh, played the mos vital role in the discoveries. Robin said, "the amazing part is that nobody, in the history of its existence, has ever recorded its presence."