on February 28, 2010
Two fossils of ancient giant penguins were discovered in South America

Hey, let’s talk about something very interesting today! Yes, this post is about discovery of penguin fossils that had been made in South America. The discovery has revealed quite a great deal of information about the history of little penguins that thrive today. A report released on one fine Monday in June 2007, described that the fossil discoveries of a couple of ancient species giant penguin suggested that the little penguins that roams about the glaciers today had a real big starting. The scientists describe that the big birds whose fossil had been discovered used be move around the area that is now known as Peru over 40 million years ago.

The finding was really amazing and helped the scientists to track certain information about the ancient species of giant penguins. Scientists named the bird Icadyptes salasi, which used to stand at some 5 feet tall… a man’s height. Paleontologist Julie Clarke, an assistant professor at North Carolina State University, said that these ancient penguins were larger than any other known birds of same species living today or has ever roamed about on this planet. The largest variety of penguins living today is the Emperor penguin, which grows to nearly 4 feet tall on an average. Another new species, a smaller penguin called Perudyptes devriesi, was almost close to the size of a living King penguin that grows to nearly 3 feet tall no average. 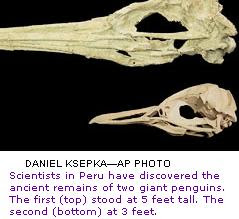 The fossil discovery of the ancient giant penguins has stirred up confusions amongst the researchers including paleontologist Julie Clarke. The confusion has rose out of the fact that the penguins, as large as the ones we are discussing about (Icadyptes salasi), shouldn’t have been found in the warm environment where they used to live. The question is how could they tolerate the natural heat? The fossils of the giant birds revealed that the species used to live during one of the warmest time period in the history. In this regard Clarke said, "In most cases, the larger individuals of the species are linked with colder climates…" How could the giant penguins manage to thrive in such a warm environment still remains a mystery to most researchers!

Even more surprising discovery is that these penguins had migrated to warmer climates much earlier than they were originally thought to have done. Scientists believe that these giant penguins hadn't moved to warmer waters until 10 million years ago. We can still find penguins across the warmer areas like the islands of Southern Hemisphere and even near the equator. But these penguins are much smaller and are found in the cold water belts. Bigger varieties are usually found in cold regions like Antarctica. How could Icadyptes salasi handle the extremely warm environment, despite being much bigger than the penguin species found today?
Bird Discovery News Fossil Discovery