'Vampire' – Skeleton Discovered From a Grave in Venice 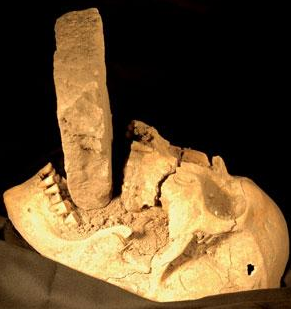 Fossil Discovery: Skeleton discovered from a grave in Venice

As recently as Feb 2009, the researchers exhumed a skeleton from a grave in Venice. The discovery opened up a new horizon in many fields, as it is claimed to be the first known examples of the “vampires” that have been globally referred to in so many modern documents. Matteo Borrini of the University of Florence, Italy discovered the skeleton of a woman with a small rectangular piece of stone block in the mouth. Borrini discovered this strange skeleton while excavating mass graves of the middle aged victims of the Venetian plague of 1576 on the Lazzaretto Nuovo Island in Venice.

Borrini’s amazing discovery of the skeleton has helped the researchers to draw a link between the epidemic (plague) and human belief during those days. It was due to the wanton spread out of the plague, that people had been victimized by death. At the time the woman died, people used to believe that the plague was spread out by the “Vampires”, which did not drink people’s blood, but killed them by spreading out diseases by chewing on their shrouds after they died. According to Borrini, the grave diggers, put the small block of stone in the mouth of the dead women (those who were suspected to be “Vampires”) to stop them killing people by spreading epidemics.

According to the researchers, the belief in the so-called “vampires” had risen probably because of the fact that sometimes blood oozed out of the victims’ mouth while dying, which consequently caused the shrouds to sink inwards. Borrini presented his findings at a meeting of the American Academy of Forensic Sciences in Denver, Colorado during the last week of February 2009. He claimed that this might be the first known example of vampire to have been examined forensically.

Interestingly, Peer Moore-Jansen of Wichita State University in Kansas claimed that he had found similar skeletons in Poland. According to him, "claiming it as the first vampire is a little ridiculous". Borrini says that his study includes every detail of the earliest grave and shows archaeological "exorcism evidence against vampires".
Fossil Discovery