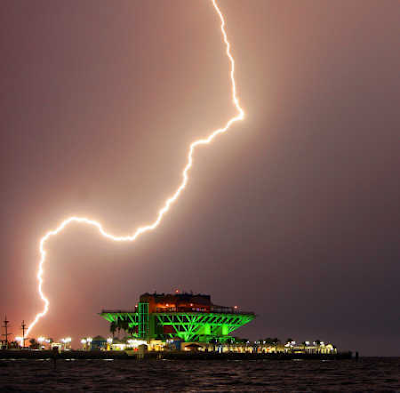 Here’s another very interesting thing that I had discovered from some reliable and valuable sources some years back. Someone had hit the media with an amazing question… “Why is it always that the lightning flashes are seen in zig-zag lines?” Well, a question like this is hardly faced by teachers and parents, I am sure. I personally haven’t yet come across too many kids asking such uncommon question!

So just read on… find why we always see thunder flashes in zig-zag lines. Lightning bolts are flashes that are produced by the high intensity electrical discharges in the atmosphere. Let's start off with an explanation that a lighting flash is a plasma and stripping the electrons off the atoms and molecules! The high intensity electrical discharges are produced due to the friction of the rising hot air with the condensed water particles in the cloud, thereby creating the positive electrical charges, accompanied by the build up of high intensity opposite charges – Negative Charges at the nearest point on the ground. This discharge doesn’t happen until the intensity of charges in the clouds exceeds the optimum limit. In this way a sequence of random discharges occur due to the repetitive crossing of critical limit of the intensity of the charges. The negative charges are discharged in step wise manner from the top of the cloud to its base. This is known as “Leader Discharge”. All the accumulated charges are discharged towards the Earth, which is actually the opposite negative charges and during this course of action reverse flow of electron (negatively charged particles) takes place from the ground towards the cloud, along the same path. The high speed of the high voltage current causes flash, which we call “Lightning”!

This flow and reverse flow of charges are of extreme high speed and are random and cross the atmospheric mediums of varied densities. As it happens randomly and crosses varied medium densities in atmosphere, which make the perception of the lightning in a wavy and zig-zag mode.

Remember, had this atmosphere been a vacuum, we could have seen lightning flashes in perfect straight lines
Atmosphere

Denim said…
Well had there been no atmosphere then there would have been no clouds to cause thunder and rain and no electric discharge would occur in the first place...so :D.
Moreover air and tropospheric layer is required because even at higher strata of atmosphere if there were clouds that caused lightning then it wont travel down to earth/planet but just flash off in the atmosphere.(no pathway for charges to come down)
April 15, 2010 at 6:19 AM