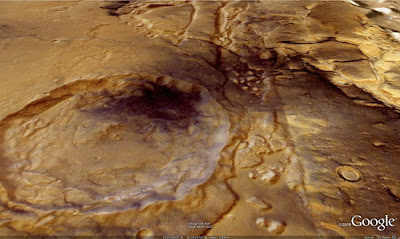 The first map of Mars - the red planet was published in 1895 by Percival Lowell. After years of telescopic experiments of the neighbor planet Lowell came up with an amazing pictograph of Mars that enticed interests of millions across the globe. Time's different now. Everything is at your finger tips. You can use your web browser to find what's there in Mars. Yes, those smart brains, who brought you the astounding Google Sky and Google Earth have now come up with what they call Google Mars. In collaboration with the NASA scientists at Arizona State University, they have created the most scientific map of Mars. Never before this any map of Mars, as detailed as this, was made. Good news is that all the three software, the Google Earth, Google Sky and Google Mars are now a complete package and downloading it is quite easy. The 3-dimensional topographic views of Mars is now so realistic that exploring the virtual Mars is really an amazing experience. Noel Gorelick, the tech lead for the Google Astro team said about the data and images,"It's as raw as it possibly can be". The data that comprises Google Mars 3-D doesn't look like the processed and touched-up/edited images. Students, teachers and parents will find their hours frozen with fun and excitement while soaring through the alien trenches on the red planet.

Most of the imagery used in 3-D Google Mars is publicly available and are easily accessible on sites across Internet, said Noel Gorelick, the project leader. This new tool helps to explore the whole of Mars by fetching data together in the same place and at the same time. That's where the value of the tool lies, thinks Gorelick. The data and the imagery that can be found in Google Mars 3-D are based on the pictures received from the landers and orbiters since years. Ashwin Vasavada, the NASA researcher in Jet Propulsion Laboratory (JPL), who wasn't tied to the Google Mars 3-D project, said:"We spend the money to send craft to study Mars, but compiling all that data isn't something NASA has the resources to do". 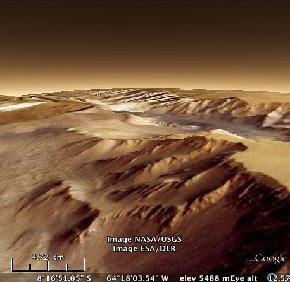 Noel Gorelick, a NASA veteran for 19 years joined GOogle in 2006. He used the NASA's images of Mars to create the 2-D application called Google Mars. On further processing the data from NASA, the U.S. Geological Survey, the European Space Agency and from other reliable sources, Gorelick ungraded the Google Mars map application into 3-dimensional version, thereby creating scopes for the armchair explorers to spy on the red planet.

Google Inc. and NASA joined hand to launch the Mars add-on for the Google Earth application in February, 2009 that has it's popularity already at the peak. The the Google Mars 3-D updates of March, 2009 enlists more interesting features like
spanning back to see the historical globe maps of Mars, watching real-time orbital tracks of space craft and guided exploration of Mars. Interestingly, the users of Google Mars 3-D application can explore the Mars and spot out the points of some of the NASA landers and rovers.
Astral Science Life in Mars Planet Science

Jeff said…
Hey... this is really a great post. I had a bit of ideas about Google Earth. Times flies and technology proceeds faster that light! Google has come up with Google Mars... didn't know that. Really exciting! Great post keep up your good job...