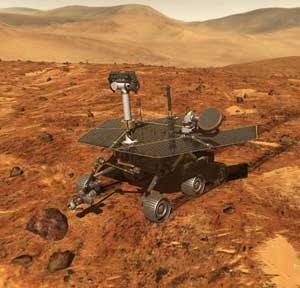 Owing to similarity and proximity to the Earth, scientists have long speculated the possibilities of life in Mars. For several years, scientists have been putting forth loads of convincing logics to support their believes that Mars used to host water early in its history, if not now. Very recently, observations from the Mars Phonenix landers and the certain other spacecrafts have given evidences of the deposition of water as ice at the polar region of the planet. Evidences ice have also been shown in the soil-covered glaciers in the mid-latitude region of the red planet – the Mars more than around 3.6 billion years ago. Now the question is how much of the planet was occupied by water. Also very less is know about what actually happened to the water during its geological march till the present times.

Scientists have pointed out a period when the water in Mars formed clay-rich minerals, after a drier span of time. Moreover the minerals and acidic water had an adverse effect on the plants that believed to have existed in Mars. If this had been a true incedence, then it can be assumed that life might have there in Mar, and they ceased to existed due to the adverse reaction.

A team researchers led by Brown University has been burning the midnight oil, looking for the evidences if there was life in Mars at all. They found traces of carbonates, which is a long sought minerals that proves the the existences of life in Mars – especially water organisms. Scientists have ascertained that the acidic effect had left some parts of the red planet unscatched, where life (that could have probably existed) came to an end due to other adverse affects. Clue for life may be there in those regions of Mars that had not underwent the acidic transformation. A graduate student of Brown University, Bethany Ehlmann, who's also the lead author of the paper that appears in the December 19 2008 edition of “Science”, said that "Primitive life would have liked it". He added: “It's not too hot or too cold. It's not too acidic. It's a 'just right' place”.

The finding of carbonates in Mars, strengthened the belief of existence of life in Mars. Presence of carbonates implies that planet had neutral to the alkaline water, when the minerals formed in the mid-latitude region of Mars. The carbonate traces have been showed up clearly in about 24 images captured by the Compact Reconnaissance Imaging Spectrometer for Mars, which is a hi-tech device installed by the NASA Mars Reconnaissance Orbiter. This Compact Reconnaissance Imaging Spectrometers for Mars (CRISM) searches for the residual of minerals that had formed due to presence of water or might have been formed due to thermal vents or hot springs on Mars. The existences of water in Mars spans far back in its history – around millions and millions of years back. Scientists have traced the minerals depositions around the trough, called Nili Fossae. Nili Fossae is 667 kilometers long crack in the surface of Mars that has been eroded and partially filled up by the sediments of minerals. Evidences of carbonate depositions have been found in the sides of eroded mesas, sedimentary rocks within Jezero crater. Traces of carbonates have also been found in Libya Montes, Terra Tyrrhena and even on rocks that are exposed on sides of valleys in the crater's watershed. Researchers assumes that possible evidence of past life in Mars could be found on these locations in the planet.
Extraterrestrial Life Life in Mars