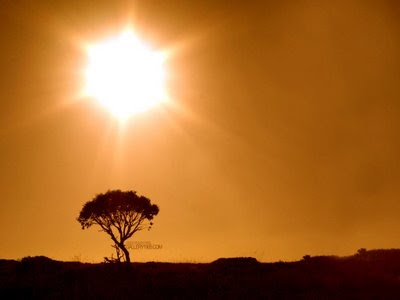 Well, this news is not about any discovery; it's an invention. I just discovered it while scrambling around the net. Hey... read on, it's a real great news for me, for you and for the world.

Have you ever spared a thought over issues like transforming the deadly global warming gas into something that's really important to us? It's now the time when factories can recycle Carbon Dioxide into carbon-neutral liquid fuel, instead of just spewing off into the atmosphere. A highly talented research team from Sandia National Laboratories had been burning their midnight oil since years, working on the technique of transforming Carbon Dioxide into carbon-free fuels. The year 2007 revolutionized the world of science with the team's grand success in developing the prototype device that does the miracle! They named it CR5 for short... "Counter Rotating Ring Receiver Reactor Recuperator" .

What Does CR5 Do?

CR5 breaks the carbon-oxygen bond in the carbon dioxide, which produces:
1) Carbon Monoxide and
2) Oxygen

This is the main and the prime step to convert Carbon Dioxide into fuel. 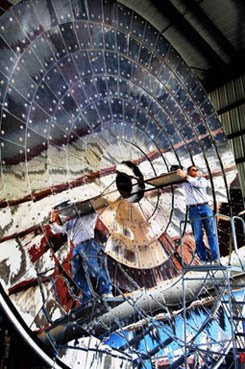 According to the inventor Rich Diver, the original idea for CR5 came from the concept of breaking down water into Hydrogen and Oxygen and then Hydrogen could be used as the most potent fuel for potential hydrogen economy.

Rich Diver and his team used the concentrated solar energy to reverse combustion to transforms Carbon Dioxide into Carbon Monoxide through this device. The Carbon Monoxide was then used to make Hydrogen that acts as the building block that helps to synthesize liquid combustible fuel, like gasoline, diesel, methanol and even jet fuel.

The researchers called the project "Sunshine to Petrol” project - (S2P) for short. The gist is: the Solar energy is used to transform Carbon Dioxide to Carbon Monoxide, which is used to form Hydrogen that in turns is used to yield the end product - “Liquid Solar Fuel” like methanol, gasoline etc.
Chemistry inventions